The morning dawned bright and clear and the kids were geared up for the sports day for which they had been practising with great excitement. The theme (I like that- having a theme for sports day) was helpers of the society. Each class selected a profession to represent- teachers, farmers, sports persons, doctors, bankers, fruit sellers, gardeners, courier boys and so on.
The Senior Kg event began with a spectacular dance on Jai Ho. Something they performed with amazing coordination. In the mass of 150 plus students, not a step seemed out of place and not a single child seemed to be the "joker of the pack" which is usually there in the "junior sections...huh"- like the one who removed his socks during a yoga session or the other who refused to skip the missed steps and continue out of step with others. Good for comic relief. The students get serious as they reach Sr Kg and looks like they are truly well deserved to be called seniors of the school!!! 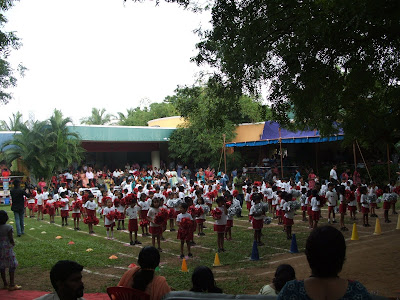 There's Tejas waiting for his event to begin. He had been fretting the entire week as his relay team member seemed to be toos low for is taste and she was making every one "late". I told him to run with double speed because relay is all about team work, and one team member covering up for the other. They were pizza makers and they had to arrange 4 slices of a pizza on a tray and bring it to finish line. 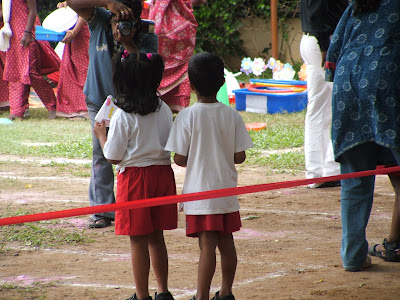 That's Tejas standing with his team on the first position. 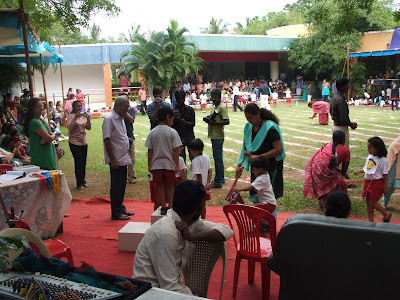 There's the Gold Medal on Tejas! 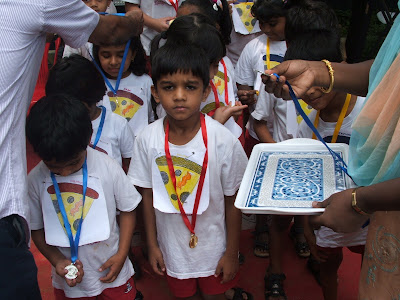 There's Ojas in the rightmost corner waiting for his race to begin- with a white "coat" and a bandage that has to be tied on hurt animals- they were the vet doctors. 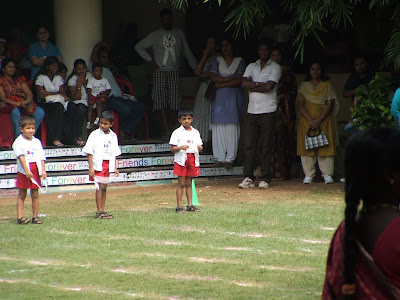 There is Ojas tying a bandage on his teddy bear's limb- he was very systematic. Placed the bandage on the field, put the teddy 's lib on top of the bandage and began tying it. He had practiced a lot and would come first or second during the practice sessions in schools 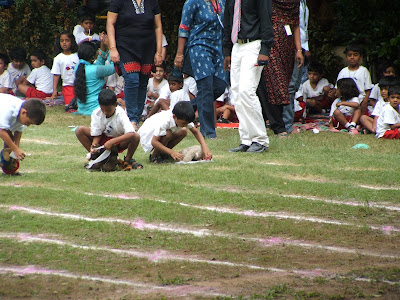 He finished 4th and I liked the fact that the school gave away consolation medals also- yellow gold is what the kids said. And my baby Ojas says- Mamma, I won! 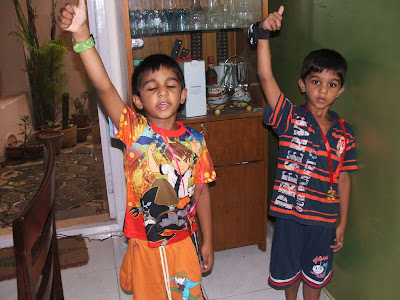 And one bonus pic- celebrity Mamma (err me ) was called to give away the medals to a section of junior kg students- err the one who never won any medal in any sport event!!! But that doesn't matter because these things skip a generation! 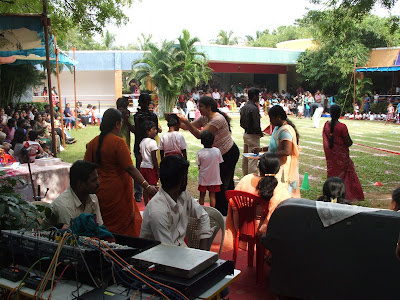 Posted by Itchingtowrite at 5:05 PM

Cheers n congrats to the Tejas and Ojas, the reason why I love to visit your blog. Of course, the fact that you make it so detailed and interesting is another reason. Wishing your family a very happy season coming ahead.

Well done, Tejas and Ojas! And hurrah for celeb mammas. :)