The journey of a writer perhaps begins with the first alphabet that one writes, haltingly, painstakingly, with a hopeful parent or a no-nonsense teacher holding and guiding the hand. Each day of the hallowed journey teaches a new word and the discovery of these exciting words provides an inexplicable delight. Slowly but surely as the love for the written word sets in deeper, a wordsmith is born.

Posted by Itchingtowrite at 7:14 PM No comments:

What inspired you to start writing?I have always been fascinated with the beauty of words, the way they sound when read or spoken, themanner in which each word is a concept in itself and how a single word here or there could create a sea change in the implication of a sentence. In school, I loved writing short stories in English tests and wrote a few articles for my school magazine. I never imagined that ordinary people like us can write books but when I saw a lot of friends publish books, I thought I must try my hand at it too.
Read more at
http://www.writerstory.com/riti-kaunteya-interview-wicked-temptations-book/

Posted by Itchingtowrite at 7:11 PM No comments:

Just revisited my 40 point plan that I had done 8 years ago and I am quite surprised to see that I have achieved quite a bit of that and also that many of them are not relevant now to me.


1. Lose excess kilos- I know it is not a SMART goal but then we don't want to announce our weight in public right! DAMN
2. Travel - atleast 1 country in each continent- DAMN only done Europe
3. Try my hand at entrepreneurship- culminating the ideas I have in mind like -DAMN not so very relevant though as I don't really want to do it
4. Write a book/ story/ publish something atleast and make money out of it- Ah, one thing I can cross out from my list but not the money making part! KUDOS
5. Drive something other than a small car, like, err, a bigger car KUDOS
6. Become an ace interior decorator for my home and change it's look from its current state of storm ravaged wasteland homely look and get the garden shipshape KUDOS though not become an ace decorator
7. Teach/atleast do guest lectures DAMN
8. Take a sabbatical DAMN
9. Highlight/ Streak my hair DAMN
10. Take a holiday with my husband (yes, it is a rarity for me- only 1 so far and I am in the 5th year of my marriage) (sob) DAMN
11. Become an expert cook rather than a random, tentative, no frills cook- develop a fairly extensive repertoire of recipes and menu items (again goal not SMART enough because I really don't know how many I can do but I will know when I am fairly equipped to cross out this item from my list) DAMN got myself a cook
12. Experiment with different cuisines and continue to make them on a regular basis rather than one off kinds DAMN got myself a cook
13. Visit my birth place (Scotland) oh what the hell DAMN
14. Start celebrating festivals the way it has to be done setting a good example to the kids  DAMN
15. Buy jewelry for myself (on a regular basis instead of just doing gold coins) KUDOS and outgrown it also
16. Start wearing sari on a regular basis to work -ah KUDOS
17. Go to theatre/ concert (never done it) (shame)- KUDOS KUDOS
18. Learn Western dance- DAMN
19. Re start music lessons (?) KUDOS AND DAMN  stopped, got it out of my system
20. Have our own house rather than a poky flat- DAMN, and KUDOS we have a non poky flat though
21. Change my furniture- KUDOS
22. Institute 5-S in my home - already started the Seiri (Sort & Throw)- KUDOS
23. Go to atleast 1 or 2 non English speaking country after learning the (basic/ functional) language- KUDOS but never learned the language
24. Go in a helicopter DAMN what was I thinking
25. Learn to Control my Temper KUDOS
26. Job related ******censored****** KUDOS
27. See the Himalayas DAMN
28. Go for a couple massage with Hubby off course KUDOS but no bid deal. different rooms!
29. Send my parents abroad- The sibling did so KUDOS
30. See the Taj with Hubby & Kids KUDOS
31. Travel in Palace on Wheels DAMN and not relevant now
32. Learn to bake 5 - 10 varieties of cakes- KUDOS
33. Learn 5 different chicken recipes and make them on a regular basis KUDOS but I got a cook
34. Restart playing kalaeidoscope KUDOS and DAMN stopped again
35. Do combined puzzles with the kids (as soon as they are old enough- incl crossword, jumble, kalaiedoscope, jigsaw) DAMN
36. Start playing Monopoly & Scrabble with the kids also Carrom (though I am lousy at it) DAMN
37. Read more authors than the usual (already started) KUDOS
38. Visit all the Indian States esp North East, and North- done with Bihar, UP, MP, Rajasthan, Maharashtra, Kerala, Karnataka, Tamil Nadu, Haryana, Gujarat, Orissa, West Bengal, Andhra, Goa...a loooong way to go but kya kare bad luck hi kharab hai DAMN but did a lot of travel
digression- I always though I would be taking annual dream holidays post marriage but that has never happened! KUDOS
39. Get a makeover done and do it regularly- basically be an aunty "maal" - learn how to do a proper make up - get funky glasses, multiple ear rings, no made up look, hair style, eye shadows, eye liners, the works added to my just lipstick look. KUDOS somewhat
40. Turn 40 in style - KUDOS


Posted by The Reading Corner at 8:38 AM No comments:

Spook Me Out contest for Face at the Window

"If you drive across that stretch of road in the night, you will sometimes see a spirit. They are white and translucent shapes floating away. They don't harm anyone. You need to just stop the car and let it pass. What do you think ITW? Do you agree with me? If we leave them alone, they will pass without harming us right?"

I was at a great loss when I was asked this question for according to me, every question warrants an answer but I could however neither agree nor disagree with his statement so was wondering what my appropriate response should be. So I just decided to show my ignorance- "I would not know because I have never encountered a ghost before."  Privately I often thought that this ghostly white translucent shapes are totally stereotypes. Do ghosts not love colour?

Having said that, I wouldn't know of an encounter from the sinister, spiritual realm considering I  never take risks, being the kind of person who always prefers to stay in the safe zone.

And that means, I will hold on carefully to any support when I enter the toilet in a rapidly moving train, will not venture out in the dark and will not enter spooky looking places like dark alleys and caves- entrances of which could easily be closed by ghosts. I would say the best student that Mad eyed Moody could have would be me because I take very seriously his mantra of "Constant Vigilance" and am rarely caught in an unguarded moment. And in the rare cases when the husband manages to startle me with a sudden "bhow" sound, my survival instinct kicks in and I scream the hell out.

Therefore I am sure that even ghosts and poltergeists are wary of making an appearance before me for fear of being spooked out by my ear splitting screams.

Perhaps the scariest horror shows that I have seen on TV was Kile kaa rahasya. On hind sight it was more of a comedy than a scary thing because of the weird nature of the ghosts that would get revealed in the end. One would feel more sorry for the so called ghosts than be scared of them. Even then, just the memory of the intended spooky scenes would ensure that at the end of the show, my sister and I raced each other to run out of the TV room to the bedroom because the last one out of the TV room will have to switch the TV off, put out the lights and take that walk through the dark hallway to the bedroom. Very scary and spooky indeed.

But this contest demands I talk about my spooky experiences and hence what may appear to other daredevils as the mildest of spooky experiences needs to be narrated here because well, spooky is spooky- one cannot measure it by any scale of reference.


One winter afternoon, I stepped out of my college hostel into a park for studying and as it often happens to people walking or sitting under large trees, I found myself being suddenly blessed by a well meaning crow. There was a small shed in the corner of the park and I got inside it to wash off the smelly crow poop at the tap. I was engrossed in cleaning up the poop in the darkened shed and suddenly the door shut behind me. Not thinking much I tried pushing the door back and to my shock the door had been bolted. As far as I recall I had taken just a few seconds to try opening the door and looking out of the tiny window of the shed. However I could see no one around except for a solo woman in the distance clearing the grass in the park. I screamed out to her hoping fervently that she was not hard of hearing. But apparently she was and she could not hear me. In those few moments I wondered what would happen to me because no one would have imagined that I could be inside the shed even if they eventually notice that I was missing. I began to feel claustrophobic and terribly scared. May be about five-six screams later, a man came and unbolted the door of the tiny shed and I stepped out in relief. However the man did not fall in my target group hence I decided not to fall on him in relief and just settled with thanking him profusely for letting me out.
To this date, I cannot fathom who locked me inside. Whether it was the same man who did it to play a prank or whether it was someone else, I have no idea but even today, a vague flash of memory of those few minutes spook me out.

This post in my entry for #TheFaceAtTheWindow Miami Blues Contest.
Posted by The Reading Corner at 10:59 PM No comments: 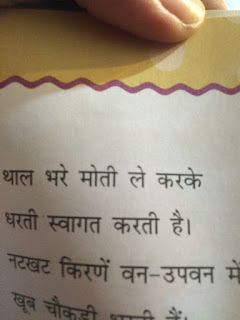 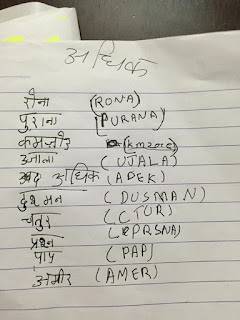