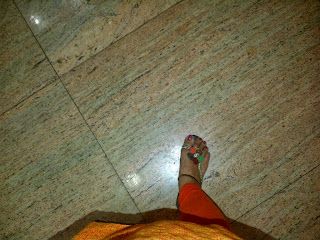 Like it?
Sent from BlackBerry® on Airtel
Posted by Itchingtowrite at 6:03 PM 4 comments:

Last week, I encountered the easiest homework possible for the kids.

To write about the brand name, slogan, target market, ingredients of a chocolate of their choice.

I was extremely thrilled getting this done and it was only belatedly I thought that what were jargons like target market, tagline etc doing in a kids' homework sheet?

Next what will they be learning?

Brand Equity? Something that took me awhile to fathom after all!

Posted by Itchingtowrite at 8:08 AM No comments:

Thank You to all those who wrote to me and commented on my post. I felt extremely reassured that the injury could be in fact healed. People shared their experiences and recommended doctors to who I could go to and it all helped me a lot morally and emotionally.

In fact my neighbours also came all out and helped me with the school drop for Ojas while I was going to the clinic morning and evening.

They took care of Tejas when my MIL would go to school to pick Ojas up.

It broke my heart every time I saw him with a bandage on his eye, yet to his credit, he was very cooperative and never gave me grief on his condition.

Everyone including the cable wallah, milk man, driver, courier wallah, kids in the building asked after him but to my surprise, our neighbour who saw him with a bandage on his eye never asked me what happened to his eye. Such a callous attitude.

i was flooded with calls, whats app and BBM messages asking about Tejas and it gave me a lot of strength and support.

My colleagues, including my regional bosses who happened to be in town were also very solicitous.

We went for the vision test two days ago and the doctor has given an all clear for Tejas' eye.
However I still have to put the tear drops eye drop for him otherwise all is ok.

Posted by Itchingtowrite at 8:11 AM 3 comments:

High Five On Reaching the Age of Five- Sponsored Post


Gondappa is a triumphant person today.

His child has reached the age of five. This is the first child of his that managed to reach this age.
All thanks to Lifebuoy's hand washing program which included a focused initiative in the village of Thesgora to help children reach the age of five.

The initiative was also endorsed by lead actor Kajol who supported the campaign with her voice.
To celebrate his child's fifth birthday, Gondappa does a triumphant hand walk in his village thus symbolising that health and strength lies in our hands only.

The more we wash our hands, the healthier we are and therefore the emphasis on washing hands with Lifebuoy has been the key for the children of the village to cross the age of five, which had been very difficult so far because most of them got afflicted by diarrhoea which is entirely preventable just by keeping the hands clean.

Starting with Thesgora , Lifebuoy aims to reach out to other villages through a series of on-the-ground charity work, to help more children reach their fifth birthday and cross that threshold also.
15th October is Global Handwashing day.

Global Handwashing is endorsed by a wide array of governments, international institutions, civil society organizations, NGOs, private companies, and individuals all of whom believe that children are the best targets to this campaign because they are open and receptive to new ideas and would take them on enthusiastically.

The risk of diarrhoea  is reduced by  42-47% just by washing hands.

Last Sunday, as Tejas was walking back from his cricket coaching, someone came and poked his finger into his left eye.

He never saw who it was and did not feel much until he came home.

One look at him and I knew something was wrong with him. He was rubbing his eye and looking very serious.

When I asked him, he sobbed that someone had poked his eye and it was hurting. He was not letting me touch his eyes and after the headache medicine I had taken that left me light headed and generally very pleased with the world, I did not suspect that anything would be wrong with the eye.

I gave him warm compresses using a towel soaked in hot water and even ordered a pizza for the kids.

Tejas somehow managed to eat a pizza and went immediately to sleep.

The next morning, he was howling with pain. I made him wash his eyes and hoped that he was feeling better but he insisted he was not ok. Even though the eye looked ok save for some redness. But it is very unlikely of him to cry so much. So I decided to take him to the eye doctor.

While waiting there, he bravely told me that he was feeling better but he could not go to school because he will not be able to write with his eye shut,
The doctor's assistant who is half doctor himself perhaps, gave him an eye drop which helped open up his eye that was progressively getting shut.
He then applied an orange florescent paper strip dye and showed me a green patch that was seen on his eyeball.
'Cornea damage' he pronounced. I have never heard any other two words that could terrorise me so badly.
It will heal he said and immediately sent me to see the doctor.
The doctor told me it was a serious injury and if it does not start healing by evening, we had to think of something else.
They applied a few more drops, antibiotics and some gel and shut his eye and patched him up.
The doctor prescribed Sporidex capsule to be eaten twice and combiflam painkiller, for the next three days.
Monday evening I again went to see the doctor and they put the dye again and saw that it was healing.
Tuesday morning it was better, just a dot on the cornea and by evening the dot had disappeared but a new patch had appeared, perhaps because he had rubbed the eye during the course of the day. So he had to patch him up again.
Wednesday morning the patch had cleared. And he was prescribed tear drops and vigamox every two hours and I need to take him to the doctor tomorrow morning to get an all clear.
The vision will be blurred for a few days because his pupil has been dilated by the multiple eye drops. And I need to review it in four to five days and get the eye test done.

I am so scared.

Pray for my baby please

Three mornings in a row, I have been waking up with a bleakness within me. While every visit pronounced progress, I am still scared. Perhaps I will never be able to relax about my baby's eye anymore.
Posted by Itchingtowrite at 12:19 AM 15 comments: