I just realized that I have not been posting at all this year due to a variety of reasons like busy schedule, lack of motivation, and not much happening.
So I just want to get back to those days when I posted almost everyday even if it meant mailing over just a few lines via my phone.
So here's a start with some flashback.
While in Ooty we did very little beyond eating and resting in our rooms in Holiday Inn because of cyclone Thane, there were still some things we got round to doing apart from buying home made chocolates and the below worn Doremon caps 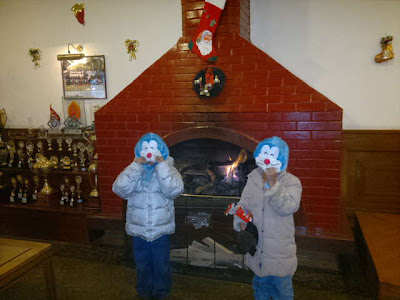 We went to the wax museum and this statue was the most photographed one among all the other statues of political leaders. Kindly note the chicken roasting over the faux fire and the drinks 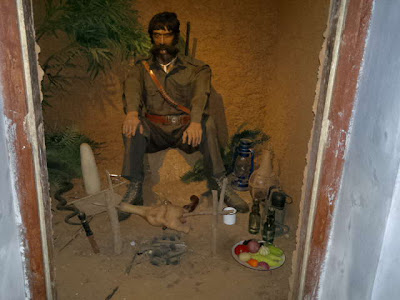 The kitschy thread garden - all made up of silk threads 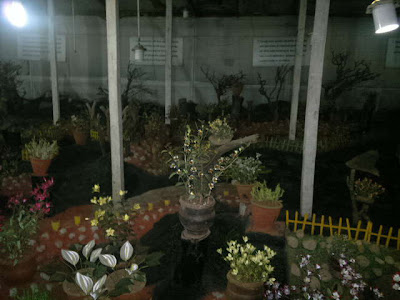 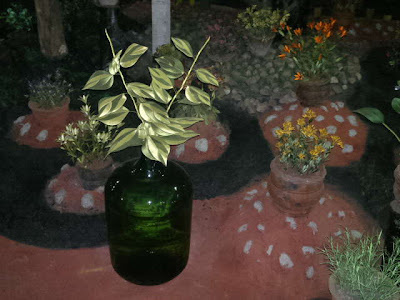 My favourite one.. this has no canvas backing... All thread 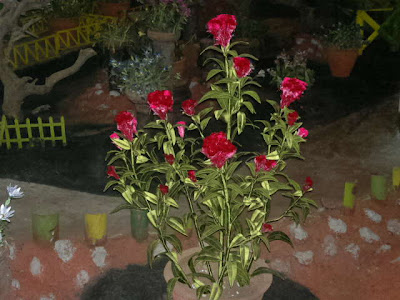 Posted by Itchingtowrite at 8:39 AM No comments: 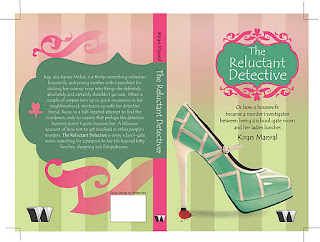 Last evening I received my copy of The Reluctant Detective. In my eagerness to reach the end of the book,
- I did not make dinner
- I ignored the kids completely
- I let them play for as long as they could and then they fell on the bed exhausted, one on each side of me
-I read till my eyes drooped and picked myself up, pushed the kids a little away from me and read again, this time to the finish
I slept with vivid dreams of cops sleeping on duty and goondas on 2 wheeler knocking on my car window and me scared to start the car because I knew that the battery was dead and didn't want the potential murderers to realize that.

Even a whiff of bad news or out of the ordinary event affects an individual no matter how unrelated the affected party is to that individual. While normal life does not stop, one continues with one's usual routine, but somewhere in the back of the mind, there remains a nagging discomfort/ sadness/ empathy with the person affected by the event. Sometimes one gets over involved to the point of obsession and tries to work out what happened, and sometimes one just maintain a mild interest without getting affected by it.
And for some, like me or the Kay in question get nightmares or other manifestations to plague them for a long time.

This is what happens to Kay Mehra. She has a morbid curiosity about everything. She is a self declared "gossip queen" and nothing passes by without going through her watchful eyes or ears.
But, a corpse is discovered near her complex and Kay is the last person who had seen her alive that day. Yet, she hears about it only at the end of the day from none other than the police.
Furthermore, she and her husband chance upon another dead body in the same spot further into the night.

Kay is more than mildly interested in this case. It is not just another piece of local gossip for her but she wants to solve it. She is involved simply by virtue of being in contact with the body before or after they became bodies from persons. Even though she did not really know either of the bodies personally.

I thought she will play the Sherlock Holmes and that's what I asked Kiran in the interview. But as she mentioned, Kay is the Watson here who sets about using her common sense and tries to go back to the crime scene and work out the possibilities.

While the murders do keep her mind occuppied, her life with her son Kabir, the spouse and her friends goes on as usual.

What I liked about the book is that it could be anyone's story. There is a lot of urban speak that one can identify with.
I loved the line in context of longterm married spouses- one is allowed to grumble without the other taking said grumbling seriously enough to actually alter the behaviour pattern that sets off the aforementioned grumbling.

For those who know Kiran well, shades of Kiran are vividly felt in Kay's fashion consciousness and weight consciousness. Even the voice is her patented style which has delighted blog readers for sometime.

She has put a piece of herself in this book and that is evident.

And no, this is not a complicated detective case. If I were to identify it with an existing style, it is more in line with the Ladies Detective Agency series, simple everyday sort cases unlike the dark, intrigues of regular mystery novels.

A light and refreshing read overall.
Plus I love the cover and feel of the outline of the shoe.

Journalist, blogger, sharp businesswoman, twitter personality, mother to a brat, an efficient homemaker to boot, and a social service person- her India Helps gives help and hope to many.

That is Kiran Manral in a nutshell and now she is a published author and her first book - The Reluctant Detective that has hit the stands. Check out the book blog. (http://www.thereluctantdetectivebook.blogspot.com/) 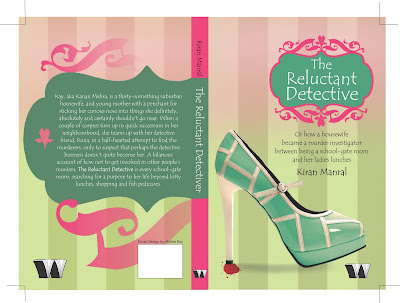 This is a detective novel. Not a tearjerker romance or a chiklit or a spicy bitch fest about everything under the sun.

Well, Kiran is the first author whom I can claim to know very well even though I have never met her. So it is very difficult to do a standard run of the mill interview with her. It would be more interesting to ask her what really makes her what she is today.

So here is a spicy, whacky tete-a-tete with Kiran that reveals her innermost desires and thoughts.

1. Women are designed to be observant, have eyes at the back of their head and have that insane urge to get to the bottom of the most insignificant matter. Give me one example of your superior piece of elementary detection in your everyday life that gave you immense satisfaction.

I am, actually, the most scatty person around. I don't notice things unless they're standing right in front of me with a banner and bold capital letters spelling out what it is. Sleuthing skills? Oh I'm super sleuth in figuring out when my brat is pulling a fast one on me or lying about something. But that would be mother's instinct I think and no particular sleuthing skills.

2. What is your darkest side.

I am a big fan of horror--movies, books. I like anything and everything to do with the paranormal. I'm not a buff of slasher movies, but anything that is based on real life incidents I like to investigate, read up, view thoroughly.

3. Your most delightfully wicked deed so far

...Ah. I'm a goody two shoes. I swear I am. I am a good girl. I don't do wicked things. Or at least not for public consumption. But I guess it would do no harm to me now to confess I was the one who put chalk powder on my French teacher's chair the day she was wearing a dark skirt. Yes. That is the wickedest I have been.

4. Your most fantastic yet believable excuse for a job not done.

I had a blankout and wandered around the streets for hours forgetting who I was and what I was doing.

5. You hear a suspicious noise in the middle of the night. What will you do.

Go right up ahead to investigate, keeping the husband in front of me of course for protection.

6. Your biggest regret so far.

That I didn't start writing earlier. I got too caught up in the mundanities of everyday life to take time out and be disciplined enough to write seriously.


7. Who would play you in the movie of your life

8. Are you a Coffee or a tea person

Coffee but I drink more tea than coffee

9. Is your cupboard the Nightgown on the hanger types or treasure hunt for lost and found a garment types

Somewhere in between and the nightgown in colour coded stacks and two racks reserved for black tee shirts types.

10. Tell us about the book. Does the reluctant detective operate alone or is there a Watson with her or perhaps more relevant for India, a Daya who breaks doors or brings in the laash.

LOL. The protagonist is actually the Watson, the sidekick. She is least interested in detective work, but just has a morbid curiousity about things.

11. Short fiction or epic novel. Whats more up your alley.

Depends on the author. Some authors are better in short fiction, and others, you enjoy as a long leisurely read.

12. Your most embarrassing faux paus

Oh so many. Most recently, had a long conversation with a lady at a society function, ended the conversation and for the life of me couldn't remember who she was when another lady I was with asked me who that was.

13. One item you could kill for

14. Shopaholic or Undomestic Goddess. Who are you more likely to identify with
Both actually, although current rate of inflation has ensured that the shopaholism is under control

15. One word that is the essence of Kiran Manral.

16. Any one incident or reason that shaped you or was the turning point for your life or career

My father's death when I was nine. I think it was then that I realised that we are all truly responsible for ourselves and everything can change at any moment. So make the best of what one has, and count your blessings everyday.

You could your copy of the book here.
Posted by Itchingtowrite at 1:00 AM 13 comments:

I have ordered The Reluctant Detective by Kiran Manral.
Have You?
Believe me, there is a special thrill in ordering books of an author that one knows!
Posted by Itchingtowrite at 10:09 AM 3 comments:

Chennai city has never looked dirtier than what it is now. After the Government takeover of the corporation, one can find garbage dumped all over the streets. Places that had never been garbage dumps before are being used as spots to dump litter.
The garbage collection guys don't come any more. Dustbins remain overturned or overflowing.
The shame of the city is in full view.
Anyway, heard that a private firm has taken it up on piecemeal basis. Let's see how they fare.

Meanwhile, check out these stories of hope and experiments on this site on solving the garbage problem.
Posted by Itchingtowrite at 9:05 AM No comments: