Was speaking to the pediatrician who had started practicing since 1978. He mentioned that his fees that time was Re 1 and went on to become Rs 10-15 in 1985...

Wow !
Sent from BlackBerry® on Airtel
Posted by Itchingtowrite at 8:39 PM 3 comments:

We were making a paper cut out of a cube. Project from school, dont ask. Given a choice, I would never do it.
So once I had the cut out done, I asked Tejas, so now how do you want to stick this together.

Posted by Itchingtowrite at 8:20 AM No comments:

So I had been wondering why i was unable to see the computer screen properly. It was especially problematic after I changed to my new lens.
I was wondering
Whether my power had changed
Or whether the lens was not made correctly which meant the entire strip of 3 would be wrong
Or whether I have suddenly developed plus vision.

I had been squinting at the screen for two days especially with the left eye when it suddenly struck me.

I exchanged the lenses and the world seemed much brighter.

But what worries me considerably is that in these two days,

I was most concerned about

- how will I wear lenses if I get plus power
- What will I do with the six months worth of lens that I had purchased at discounted rate.
- And that I will have to spend a few hours at the doctor's for checking my eye

And that thought itself is most worrying that i was worried about all the wrong things
Posted by Itchingtowrite at 10:17 AM 1 comment: 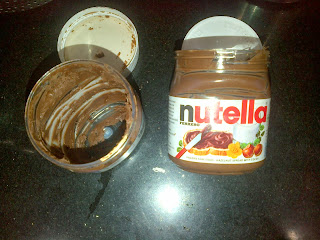 Empty Nutella jars. One that was supposedly full turns out to be empty thanks to the husband.
The kids are greatly upset.
Sent from BlackBerry® on Airtel
Posted by Itchingtowrite at 9:07 PM No comments:

So P aunty of Bijoy and the Big River fame came to school to talk about story telling, illustrating etc.
The school claimed that the kids asked a lot of questions.

When I asked Tejas did he ask any question to aunty, he honestly replied no.

But Ojas says, I did not ask any question but I wanted to. Since the mike was not given to me, I could not ask.

I left it at that.

Ojas had no answer.

Tejas had a smug 'I told you'  look I imagine.

Posted by Itchingtowrite at 9:29 AM No comments:

On My Sponsored Posts

You would have noticed that I have been doing a few sponsored posts lately on my blog.

Some of you may think I have gone commercial, become a mercenary  and would post anything for money and perhaps the credibility of my writing would go down in your eyes.

You might think that my posts no longer come from my heart.

I agree that the money is exciting but that is not my only motivator to publish them.

It is like adsense, yes you might feel happy if some money comes in (for they never come, never, ever) but that is not the reason that propels you to blog.

When the campaign manager approached me for these campaigns, I was a bit apprehensive that I might have to talk about stuff that I could totally not relate to, like men's underwear or some random toilet cleaner or dish wash or worst some junk food which I totally love yet would not want to post about publicly or some weird foreign campaign which would never strike a chord with me.

I was pleasantly surprised that while the campaign was definitely by an FMCG (Unilever so far) but they really had a social cause backing the campaign. They are corporate social responsibility ads.

So ultimately it is a win win situation. I get to help in a campaign that spreads awareness, and I do it because I really believe in them. And at the same time, get paid for them. What more could one ask for.

So far, this blog has earned me two Nokia phones and a few dollars in cash apart from the the many books that this blog and The Reading Corner has given me. And yes, I take it as perks of blogging. Many of the bloggers out there have got book deals and perhaps their popular blogs helped them get a positive frame of mind from the editors and not to mention the networking that is part and parcel of blogging.

I have been approached to do campaigns that I did not believe in (paid and unpaid) and I have refused if they did not go with the theme of my blog.

I have hosted writers on Reading Corner without reading their books in exchange or without getting paid for it because I believe that if my one blog post can help them gain a bit more popularity than their then state, I will consider my task done and be glad that the writer gets an opportunity to reach out to a few more readers.

And no, this post is not sponsored! I felt that I owed an explanation for the readers.

Posted by Itchingtowrite at 9:26 AM No comments:

Listening to a Story

For a nation where oral story telling is a way of preserving history, and where epics are every growing in size and chapters and where every child loves a good story that is read out to him, audio books are still nascent and untapped.

What are your memories of being read out or being told a story?

How easy do you find to understand and follow an audio book?

Which is your favourite audio book?

Read on a bit about audio books at the Reading Corner

Posted by Itchingtowrite at 9:11 AM No comments:

Light up the Future with Project Sunlight- Sponsored Video

Because there has never been a better time to create a brighter future, we are launching Unilever Project Sunlight .We believe in a world where no child goes to bed hungry, where every home has enough water to drink, wash and clean, where preventable diseases are prevented, and where every child lives past their fifth birthday.We don't pretend to have all the answers, but we are inviting you to join us on the journey.

So says the influential voice of Shah Rukh Khan in the Indian video.

Unilever has launched Project Sunlight that encourages expecting parents to join hands to create a better future for our children.

And as expressed in the words of one set of parents, "We need to change to be able to create a better future."


Expecting parents shared their apprehensions for their unborn children.

“Seeing the present we are scared for the future” is what they said.

The film that was shown to them talked about revolutionary methods that were developed to grow more food.
It talked about the efforts made to provide clean drinking water available
And promised that their future children had more possibility of having a healthier heart and seeing their future grandchildren.

The film promises that there has never been a better time to create a brighter future for everyone in the planet
But for that,

We Need to Take Action

"Make a difference at project Sunlight"

For more information, go to the Project Sunlight site at http://unr.ly/1hUT2HS 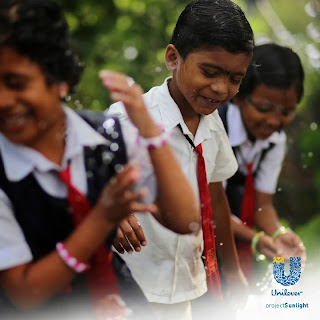 Posted by Itchingtowrite at 4:42 PM No comments: 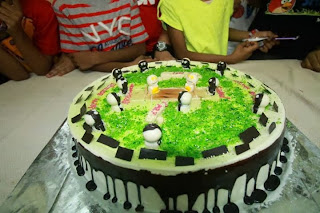 The eight birthday was a sports themed one.
Extremely convenient because the cricket party was conducted by the husband and the other stuff like football was self conducted by the kids. The baseball and badminton did not happen though.

We did a quick IPL quiz downloaded five minutes before the party. The kids answered everything. Except two questions for which they said they had not seen "that" match!. Smart

The cake was butterscotch (which the cake shop claimed as chocolate which we had ordered) decorated with green sprinkles, a pitch, toothpick stumps, cream bat and ball.
We proposed that they add chocolate dolls- 13 players and the children picked a player each after the cake was cut.

The snacks were the usual fare- chips, juice and cake along with Maggi Noodles.

We had a small dinner afterwards.
The return gifts were the books Diary of a cricket God and Diary of a Soccer star bought off landmarkonthenet.com 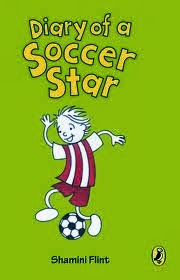 Posted by Itchingtowrite at 9:56 AM 2 comments: