Words that cracked me up the last few months

Mamma..why did you out your finger in the milk
Ojas...I did not put my finger, I put my entire hand

Tejas promised his teacher he would get the tennis bat for a child for participating in a program
Turns out he was about to hand over the mosquito bat.

Tried playing Kabbaddi with the kids thinking I could catch the tiniest fell
Ojas spoke in a stage whisper...catch my mother


Ojas- Muslims go to metallica mamma.
Why?
Ojas-metallica and medina!!

And recently Ojas composed music on keyboard, meticulously writing down the notes
Posted by Itchingtowrite at 8:54 AM No comments:

"And we meet again," said Aryan, his voice sounding a little strange in the setting of Tara's home. As he took in the sight of Tara standing, her chiffon sari giving her an ethereal character as she came into his view, he smiled. She looked just the same, the way he had preserved her in his mind, even though he had hated and obsessed over her at the same time, if that was possible.

A nosy gossip queen had given him all the information he  needed. She worked, while her husband Shekhar stayed at home. An ISB graduate, staying at home and freelancing? He had almost guffawed in delight at this development.

He couldn't believe his luck when he saw her the day he moved into the apartment in her block. And today he was at her doorstep again, like that night, sixteen years ago. That fateful night when he had first met Tara. The party, the fun, the happiness, all came back to him. He had felt like a part of their circle. No scratch that. Her circle. And when she had sweetly ruffled his hair, and invited him to join them after the formal graduation dinner was over, he had felt that she was leading him on. He was there on an invitation from his cousin who was also graduating from ISB.

Unlike Kaizaad and Shekhar, Tara had joined ISB after a year of work experience.  So they being two years older than Tara formed a coterie, and his cousin and he, Aryan, became Tara's partners in crime as Tara and his cousin kept on insisting when he took tequila shot after shot on a dare that night, he taking the shots on proxy for the girls and she edging him on to help her win, because she could not hold more than two.

And suddenly, Tara had announced that she had to go back to her room to finish her packing and catch some sleep as she had an early morning flight to catch the next day, while Shekhar and Kaizaad were staying back to orient the junior batch into the
college.

Aryan had not believed his luck. Especially when Tara had, after hugging Shekhar and Kaizaad, turned to him and given him a tequila fragrant peck on his cheek, making him miss a heart beat.
Aryan had feigned sickness and taken leave of the party immediately afterwards and taken drunken steps back towards the students' quarters.
Not to the boys' quarters where he was staying that night but to the girls'. One girl precisely. The only one girl who was alone at that particular time, in her room, waiting for him, he had known.

He had knocked on the door and she had opened immediately, making him believe that she was waiting for him, eagerly, on the other side of the door.

She had the grace to show a mild surprise on seeing him at the door and he had entered and shut the door, taking in her beauty.

But all this had been to just play hard to get, he knew. Well, two people could play the game. He had sauntered in and collapsed on the standard regulation fake leather sofa of ISB quarters. But he had a hard time making space for himself because it had been full of luggage in various states of packing.

"Err, Aryan, I am not sure why you are here. I am a little busy and need to finish my packing." She had said.

He knew at that time that she was determined to make it hard for him. And he had to change tactics to get her to fall in line with his plans. How inconvenient. Well his tried and tested formula was ready for use as always. Girls always fell for that.

"Just felt a little lonely after you left. And I may not see you ever again. You will go your separate way and I have just come here as a guest and you will have no reason to be in touch with me. After all, you hardly know me."
"Well, then you shouldn't be feeling too bad, right?"

Ah, there was his opening to slip in a tactic to make her feel good about herself.
"Tara, I love your name. The same as the girl I once loved."

She had smiled her lovely smile and he had a tough time controlling his desire to kiss her.

But then she had touched his hand and patted it lovingly,  moving some stuff aside and had sat next to him on the sofa, causing a shiver of excitement down his spine.

She was about to say something but he had  turned towards her,  hugged her tightly and ran his lips over the bare neck of the off shoulder dress she had worn over the unsexy graduation gown.

She had protested and struggled but Aryan had pinned her down on the sofa and continued to kiss her. He remembered that he could sense her struggles slow down and her body give way to her pleasure, and then on an impulse he had blurted out "Tara, I love you."

That was a sort of switch that put off all emotions she was wantonly displaying and she gave Aryan a massive kick where it hurt most.

"What the fuck Tara."

She had jumped towards the back of the sofa where the open pantry was and fished out a massive looking knife that she waved towards me.

"Get out or I will call the security. This is why ISB should never allow outsiders to stay in the campus, this safe haven is no longer safe with elements like you. Get out"

Bitch. She had enjoyed it. I swear.

And she married Shekhar. Because he was ISB and I was not.

And today, look at him. The loser is at home and I am on the road to become the National Sales Head.

"Why the hell are you here?" Tara whispered, scared that Roohi would come out of her room and witness the ugliness.

"I have some unfinished business with you."

"Get lost Aryan. We have nothing to do with each other."

"Oh I will, but I will be back. Stay put. And I may have a thing or two to convey to your husband," said Aryan running a finger on her cheek, much to Tara's disgust.

Refusing to be scared, she stood straight and said with as much firmness that she could muster, "Get out and don't show your face here."

Aryan Ahuja stepped back and walked the way he had come, a leer on his face as he contemplated his next move.

"Me and my team Story 6D, are participating in 'Game Of Blogs' at BlogAdda.com. #CelebrateBlogging with us."

Posted by Itchingtowrite at 10:08 PM No comments:

An info for those who are perplexed about finding the right college for thee children in a given stream like engineering, medicine, MBA etc.

With the advent of multiple colleges and the commercialisation of education, it would be great to have a ready reckoner which gives us information on colleges, their ranking, their facilities and the courses they cover.

I logged on to collegedunia.com and found that it has a neat approach of classifying colleges with tabs for each section.

I expect them to have a city wise search also and a better search platform which recommends search strings.  For example if there are spelling mistakes in my search, if the platform recommends "did you mean..." it would have been convenient.

Under the section Management for instance, the following sheet shows up and includes rank and rating.


In the press release of collegedunia.com

Sahil Chalana Founder of Collegedunia, says "We spotted a huge gap in the data being catered and the quality of information being sought by College aspirants in the pre Admission session. The notification of colleges today is very scattered and students are looking out for detailed presentments such as Cut offs, Admission Process, eligibility and even Co-Curricular Facilities."

He Adds "We currently have information on 15000 colleges and universities Across India and would be able to cover 30000 by the end of 2014. We have a team of 10 people with sole purpose of providing high quality content on Cut Offs, Placements, Admission, Festivals and even minute details such as Course Intake, Fees and Reservation etc."

Hope it will turn out to be a useful site on future for me.
Sent from BlackBerry® on Airtel
Posted by Itchingtowrite at 1:10 PM No comments:

Done in a small green fair at the beach. Turned out to be an insect trail and the kids loved it much to my surprise.

This is an Indian domino cockroach which we all thought was a ladybird. Turns out it was a yucky cockroach.

After that I followed it up with a tree trail in the building where the children smelled and saw betel leaf, curry leaf, lime leaves, plenty of flowers and mango leaf. Refreshing and green nostalgic, something that even I have not smelled in a long long time. 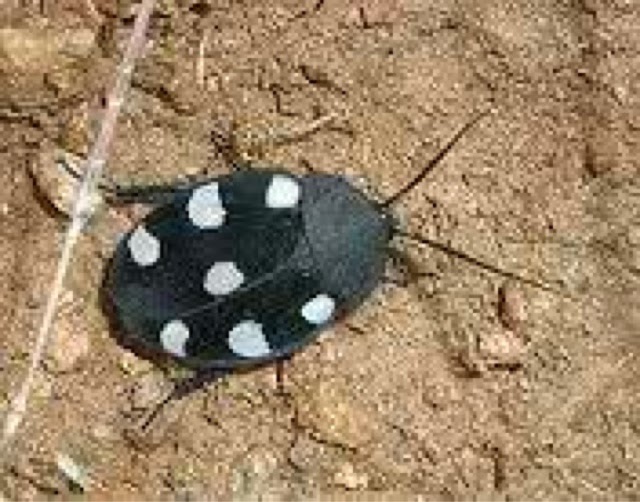 Posted by Itchingtowrite at 9:10 AM No comments:


Every day, from 7am to midnight, it’s like I have hurricanes in my home

Where do kids get their energy from? Why can’t I have some of that vitality?


Hop on to yowo
Posted by Itchingtowrite at 7:06 PM No comments:

This is modified recipe if red velvet cake, I call it brown velvet cake. Turns out super soft and light, much to my surprise. It is quite simple if you do not plan to embellish it with the cream. This was the first time I worked with cups or oz measurement and since I had a measuring jar with both oz and gram measurement it was super convenient.

Combine together
2.5 cup or 20 oz or 590 g Flour
3 tablespoon cocoa powder
1 tsp baking powder (some recipes do not recommend baking powder but I cannot imagine ignoring it in my cake mix)

Add the two mixes together however you will find them tough to blend because the eggs are half the quantity of a simple cake.

Add this bubbly mix to the above mix and fold. I topped the mix up with about 2 tbsp milk as I found the mix too stiff.

I baked the cake in my convection microwave, medium power, 180 degree C and 8 minutes

Sent from my iPad
Posted by Itchingtowrite at 5:44 PM No comments:

The idea was Ojas' he said.

This is in the diary if wimpy kinds do it yourself book. A lovely book where kids can make up their own cartoons, answer questions and generally a fun thing to do. Something that Tejas loves doing.
I am glad I bought it for him, on his insistence of course. 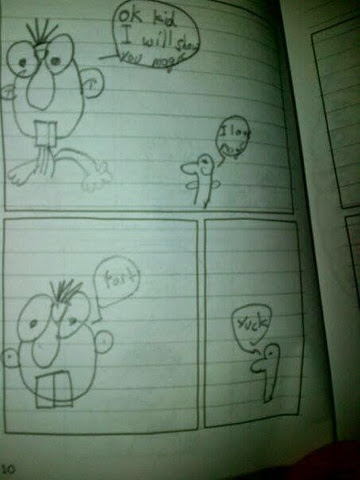 Posted by Itchingtowrite at 9:00 AM No comments: