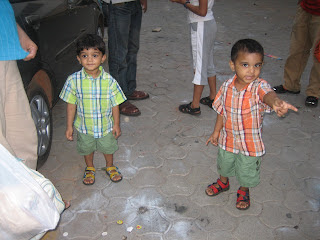 Ojas- my very own Krishna eyeing the kaju katlis on the gharaunda...strategises to reach it. Tejas looks on and Duggi's soft toy lies unceremoniously yet strategically right in front of the puja, face down . Also notice, this is the first time they are wearing clothes of different styles. Ojas had been eyeing this blue one for a few months now but I could not give it to him as it was not to his size. 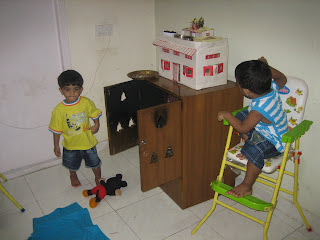 Closing on the target 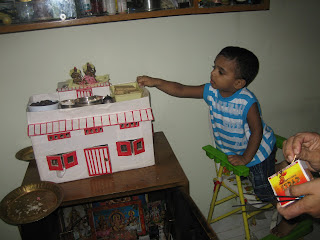 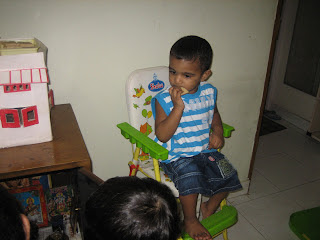 Mom & Sons join in the Laxmi Puja. Also seen one of the saris bought in Kolkatta 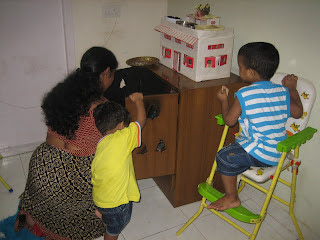 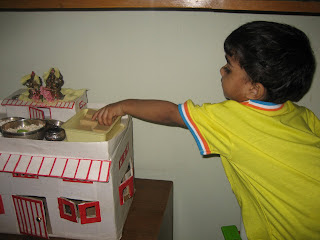 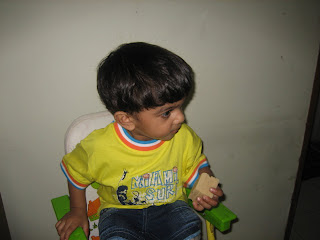 He will be satisfied with the entire Column of Kaju Katlis.
Incidentally, the gharaunda (mini house) seen in the pics is the one I have used to demonstrate the parts of a house- and actions like shut the door, open the window.. I don't know why Ojas did a "climb the roof" on his own- I never told him that.
Tejas insisted that white vinegar bottle was water...I was forced to give him a sip and it was worth watching his face.
Both have taken to teaching each other using their books
They borrowed by chakla- belan and a mini roti that I make for them and rolled out their own "otee"
Dosa is called 'Doo faa'
Duggi is being missed after his departure to Pondy
I gave them new pillow cases. The matching bed spread was spread on the other bed. Ojas went and pulled it off by the corner and proceeded to drag it to his room- assuming that matching bed spreads and pillow cases were supposed to be together no matter what.
The latest nick name is Gola- which they repeat as Goya
We want to get a set of desk/ table and chair for Ojas & Tejas
Is it the right age to buy it?- I would want them to use it for reading/ puzzles/ play dough / other activities and may be also eating as I find the high chair quite dangerous as they are perpetually standing on them
Which is the best place to buy them?
What size/ design will go on for a few years?
Help plss.
Posted by Itchingtowrite at 11:11 AM

Nice pics..Loved the way Ojas and Tejas are picking up Kaju Katli from the box.

LOL!I hope you captured that priceless look on Tejas at the vinegar taste. Ina recently tasted her first pickle and it was hilarious to watch her reaction:)
So Duggi has been finally packed off to Pondy for good is it?Do the twins ask for him?
The mini house idea is really awesome ITW. Yum,yum on the Kaju katlies:)
By the way it's a right age to get them their own set of chair and table actually.I'm planning to get one of this or this for Ina too. My friend has a similar one and now her daughter is 5 and still uses them. Just be sure to test whether the chairs tip easily and avoid such ones. I'm sure there are lot of choices there in the shops too.

By Deepa and Supriya said...

cool pics and i want some of them kaju katlies too :(. Yes, go ahead and buy them the desk and chair. I got mine for Li'l A from Ikea..simple, no-nonsense, no frills desk and chair!

Wow! I love that cardboard box home. I think I will try and make one too.

And Kaju Katli's - they definitely are irresistible. :D

nice pix. your twins are so cute.
did you make that house yourself?!

we got a set of child sized furniture when my older kid was about 18 mo, she still uses it even though she is far too tall for it now. the little one f course uses it majorly now. we got it from ikea.