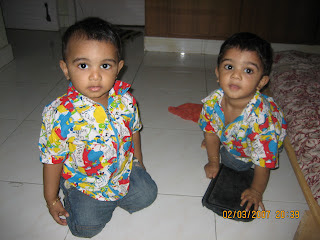 1. It was Tat you first and now Ojas says Thaks (thanks) every time he gets what he has asked for.
2. Bathing- Both were playing in their bath tub with their individual mugs. Ojas used to pull Tejas’ mug and fill it with water from his mug. Tejas will subsequently pour it on himself. The cycle continues
3. Teasing-I was trying to put them to bed. Ojas wanted to play with his toy and I snatched it away. To annoy me, he pulled my folded trousers and dragged it along the floor humming to himself
4. Telephone Manners- Ojas chats on the phone. If he is talking in Tamil he says aamma in between and if he is talking to Bihar he says haan haan
5. We went to Bata. I asked the sales guy if he had a particular pair of shoes for my son. The sales guy answered- no this is for ladies, I will show you shoes for gents… ahem.. they are still boys I thought
6. Playing- Both are playing with their badminton racket. Ojas explained the game to him elaborately. Tejas said no no and turned away. The next day Ojas took revenge. Both were playing with their cricket bat. Tejas wanted to play in some format and he explained Ojas the plan. Ojas disregarded and went to the other room.
7. Language- Both discuss issues a lot. We feel that there are 2 people talking in Chinese or some other unknown language. and they actuallyu undertsand each other. Begining of a secret language among twins?
8. Acting- We caught Ojas entertaining Tejas by acting as if he is crying
9. Quiz Time- I asked Tejas if he wants to go to the loo in the middle of the night. He said no no. After sometime predictably he wet the bed. I asked – what did you do? He answered “kakka” and went off to sleep.
10. Spencer’s mall- we took them to the play area and put them on the jeep. They were thrilled. Then we said “ta ta”. And they panicked and started crying.
11. Mamma’s helper-Ojas comes to the kitchen and promptly puts to plates on the counter for us
12. Self Reliance- Tejas tried to put the buttons for his shirt- failed miserably though
13. First Restaurant Accident- the date 17th June 2007 will go down in history as the first day Mamma got embarrassed courtesy the kids. Venue- Fruit Shop at Greames Road- Besant Nagar branch- Tejas broke the juice goblet. Mamma offered to pay but the good guys refused. After all, we are regular customers. And my sons are clients even before birth.
14. Ojas was on the potty chair. He wanted to come out of it and nobody was entertaining his request. He called the maid- Ammanaa ..When she came there he pointed at the belt muttering something.
15. Paradox- they can climb the iron grill, they can climb the upturned chair back or the step ladder, but THEY REFUSE TO CLIMB THE LADDER OF THE SLIDE. They will go up the slide or beg me to place them on top of the slide so that they can slide down on their own.
16. They have started repeating whatever we say- A to Z or anything else.
17. Tejas does not say Mausi- He mouths a kiss instead- may be he gets confused with Kissie. Ojas says Maapi
18. Tejas has been sporting his pre molars for sometime now
By the way, Tejas has reserved one corner of the living room as his कोप भवन. He stands there whenever he is upset with us.
Posted by Itchingtowrite at 12:59 PM

got the cursor from www.myspacecursor.net. there are lots of cursors there.

btw, about the secret language between twins.. i read about this somewhere. and i felt sad when the article also said that in most cases the language disappears as the twins grow.

:D So very cute! My smile just kept grewing as I kept reading point after point.

It was truly a great compilation of incidents!

how cute and grown up as well

ITW- did I dream up the babies-raining day before? I saw it, commented and then it just disappeared.
Loved reading about the twins growing up... LOL at the 'clients even before birth'.

JLT- no u did not.. i was trying it out and since th ecollage occupied half the page , i discarded the idea. meanwhile waiting for someone to guide me on how to do the pic on the header

go to layout and u can do it easily

7 is the best! both must be plotting against the grown ups of the house at any given moment...:)

My son loves the slide but he doesn't think the steps are a part of it... You are picked up by your parents and then the slide begins.

Hey, while searching for widgets for my blog, I stumbled upon www.widgetmate.com and wow! I found what I wanted. A cool news widget. My blog is now showing latest news with title, description and images. Took just few minutes to add. Awesome!

awww.. they are growing up so fast.
and it is so amazing to have all these moments saved on the blog
:)