I Did Say Yesterday

That Mid Jan is the most depressing month of the year.
But nothing so bad that a spot of shopping and partying cannot cure and more so because in Chennai it is the best time of the year- a nip in the winds, lovely weather and lots of flowers!
So what did I do to uplift my mood
1. Firstly I am not letting my mood go low due to failed resolutions
So we did the second major round of cleaning and vacuuming and rearranging the home. We washed windows, scrubbed the Air con, changed the kitchen shelf lining and vacuumed the mattresses too. I had to literally restrain the husband as he also wanted to paint the home, bring down my sole crockery cupboard and buy a new wall mounted TV to occupy that blank wall!
2. We added new paintings on another wall 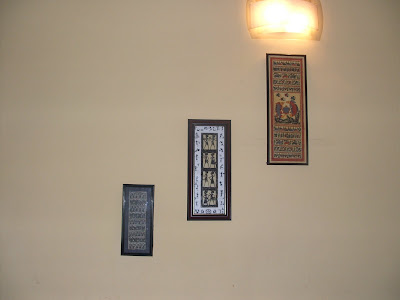 3. We brought in plants - and to my surprise it was the husband who until now would always say throw out your plants, on his own accord brought in the plants 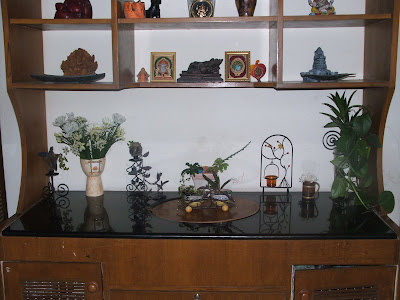 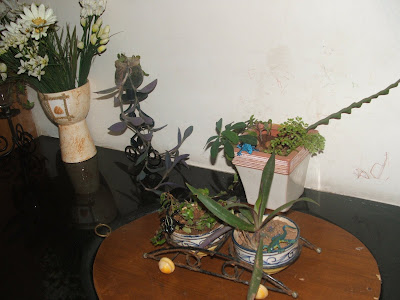 4. Shopping helps so I went to the Dastakaar haat in Kalakshetra and bought myself a kalamkari lampshade that has been on my wish list for a long time. Otherwise the fair was a replica of last couple of years. I was hoping to find the curently very popular warli iron hangings originating from Ranchi but could not.
The origin of these Kalamkari form of artwork are the leather puppets of Andhra-known as ‘Tholu Bommalata’ in Telugu. Dating back to the 3rd century B.C., these puppets are made of goat leather and handled with bamboo sticks against a brilliant lamp - lit background. The advent of other modes of entertainment caused a decline in patronage of this art so puppeteers have channeled this art into the making of small vases, partition screens, wall decorative and lampshades thereby being a source of livelihood and keeping the tradition alive. The perforation executed on the coloured leather gives an appearance of rich ornamentation against the background of light. The use of light to depict and narrate epics on screen and puppets modeled representing mythological characters created artistically out of leather have contributed to the uniqueness of these wall decorations/ lampshades. 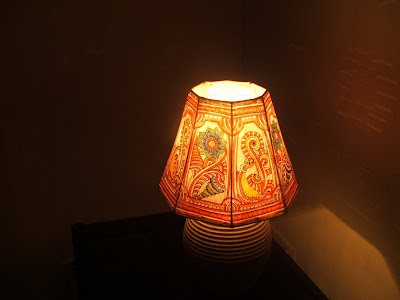 5. Flowers are blooming again in the garden so another reason to feel cheerful 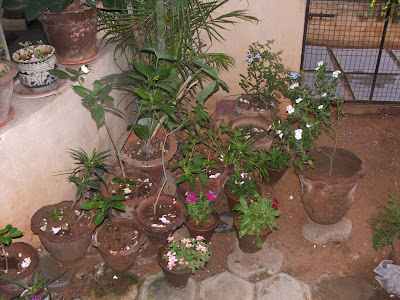 5. I added more cheer and bought a lot of flowering plants
four o clock started blooming, pink & white & red dianthus, deep red dahlia (can you see the holes in the leaves- sob sob- a caterpillar was working on it and ate up this flower in a single night- thankfully I found it before it could wreak further havoc), the pink flowers in the centre- I forget the name- they look like periwinkles but are not...they start with a light pink and go through shades of purple and mauve and rani pink- its truly amazing 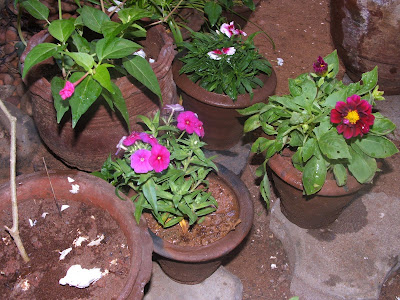 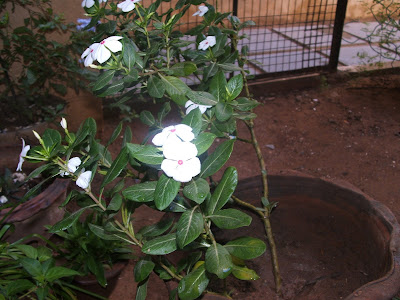 Pink Blooms- they almost look artificial- are they gerbera - they don't look like them? 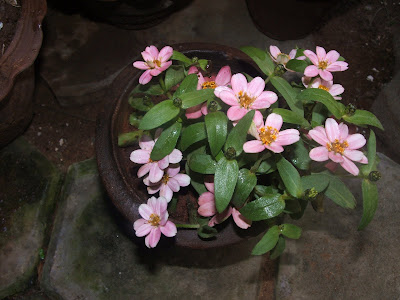 And I picked up 5 more colours of periwinkle in shades grading from light pink to deep red, a crimson petunia, red & yellow pentas and a small Parijaat plant
I am praying everyday that it blooms now!
6. Offcourse nothing is complete without a party! We had a small get together with Art & IBH at home
Among all the most painfully prepared dishes- the major hits were chicken liver, corn masala made from frozen sweet corn and popcorn !
Posted by Itchingtowrite at 9:08 AM

Also envy how you manage to keep it pretty and neat with those two around ya!

What are you? Super Mom?

Hey those pics sure made my day..little joys of life!!!

I heart your lampshade!!

I want to visit you NOW!

bald guy- no no- years of training and whacking!!
anupama- :)
Dottie- thanks! lovely aren't they? I love their wall mountable paintings- they are supposed to be mounted aslant with teh light source falling behind

I loved the lampshades, the blossoms and the way you arranged those paintings. Awesome, don't let anything dampen your spirits.