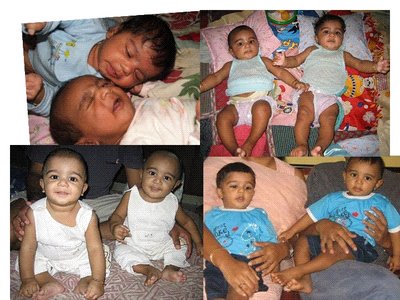 Taking a cue from Art Navy’s post of 26th Dec, on her initial days of pregnancy, I thought of documenting my experiences too.
We tested positive with the in-home test done over the weekend and since my doctor was busy getting her daughter married to Muralitharan, we waited till Good Friday to see her. We decided not to break the news to the family until the doc gave a clear go ahead. And after the confirmation, we decided to celebrate with a “whirlwind” romantic getaway to Pondicherry!
While we were quite wary of the test as I was not experiencing any tell-tale signs of pregnancy like giddiness/ nausea like the heroines in bollywood movies do, yet after 1 week of hugging the news of “baby” happening, to ourselves, we were sitting at the doc’s room with the confirmed, official medical test. She asked me to do the scan just to ensure everything was alright as I was already on the 6th week.
As we were waiting for our turn, I frivolously mentioned that it would be great to have twins.
I went in for the scan after loads of water and the doctor was taking his own sweet time and asking me plenty of questions. In turn I also started asking him whether everything was fine. Annoyingly he did not want to answer. Another doc came by and started looking at the screen. He just muttered “twins aa??” I thought I heard something that sounded like twins and on cue started troubling the doctor with questions- what happened, what is it?
After a long time the doctor turned the screen towards me and said -its twins. I could see two distinct dots.
They called hubby to show him the goods. As I saw him coming I made a ‘V’ sign indicating 2 – I doubt it whether he understood as he had such a goofy smile on his face as the doctor started giving him the good news.
Hubby’s feeling is beautifully summed up by him – Never in my school exams I scored more than what I estimated. After seeing the scan results, I felt I was getting a better score than I had anticipated!
Dr Nithyaa said probably her good luck had rubbed off on mine! I had planned not to tell my office about the pregnancy during the initial days, for obvious reasons- all should go well, and bonus and increments at office were due. But as they say one should never plan too much- Doctor advised bed rest for 6 weeks atleast to tide over the high risk twin gestation, if possible for the entire 40 weeks. So I had to break the news to one and all in office. And thereafter “baby” became “babies” in our conversation.
And Pondicherry trip went out of the window.
My CEO’s comment- how can I blend two different fragrances in the same vessel!.. For the uninitiated, I worked that time in the fragrance industry and the fragrances supplied to FMCG manufactures are a blend of ingredients that are mixed in individual vessels.
Posted by Itchingtowrite at 2:34 PM

Hey thats a nice flash back and cute pics...
Wishing you and your family a very Happy New Year!!

By Deepa and Supriya said...

Nice! I remember being pregnant and wishing it would be twins too...just the idea of two cuddly bundles seemed so cute!! But on hindsight, maybe I am glad...especially being so far away from home with no help whatsoever, handling one itself was quite a nightmare...

i hope to get twins too since twins runs in my family strongly with 2 sets of twin cousins alone... yr description of enjoying motherhood really facinates me and i hope to enjoy the same motherhood when i get married soon :)

Something to Say said...

really cute pics itchy. and nice post too. twins..yes we all dream of having them - but thank God - I didnt - one is quite a handful for me. I often wonder how to manage the 2 boys, job, home and blogging too.
happy New year to you - and your family!

Wow...it was nice to go down your memory lane! I have fantasised abt twins too....and like the others said....one at a time seems a lot easier....and you are a supermom!

Lovely pics!it must have been so thrilling when you came to know you were having twins,even I had hoped for twins too but now that I have one who herself is quite a handful I couldn't have handled two of them.It's great to see you doing such a great job at being a mom!

I have always thought that having twins is wonderful but I can see that it is that much harder - but from where I am , looking at those adorable angels, i cant help wanting them in my arms!
My new year wishes to all of you.

coffee- i love coffee too- the cold variety though
has to be me, kk- thanks
orchid, something to say, tharini, fuzzy logic, usha, neha- it is off course difficult but god gives the strength when it is needed - to maximise your capacity.
my life- all the best and keep us posted
la vida , alan- thanks wish u a wonderful 2007
art- ;)

i thought these stuff happen only in movies... was a fun read.. well narrated :)

Wish u and ur family a very happy new year Plz visit my blog as www.mnulwala.blogspot.com

that's so sweettt! i was hoping for twins too....for rather selfish reasons! i thought it would be nice to have two kids with one pregnancy :-)) well, looks like i'll need to go through the whole shebang for my second little angel!