Double Trouble or Double the fun? Smart Ways of Bringing up Twins 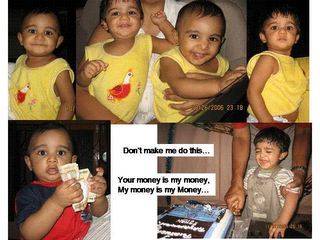 I have done a lot of Internet search looking for articles on bringing up twins and have come up with the following pointers that I am trying to follow:

1. Individuality- Never refer to them as a combination like the twins, the boys, the duo, the sisters. Always refer to them by their names. It's fun to dress them alike but sometimes I try not to dress them alike just to protect the individuality. I may use similar styles like T-shirts for both or rompers for both. People more often than not gift identical dresses. I do try to drop heavy hints to do otherwise!
2. First among Equals - Don’t follow the same order while referring to them nor designate one as older. Try to reverse the order too. Especially in c- section, the difference is usually a minute. Refrain from forcing one to call the other bhayia, didi etc. Help them adopt a non –hierarchical reference or use the name.
3. Birthday Parties- Have individual cakes for each of them and insist on the birthday song being sung twice. Record for whom it was done first and the next year cut the cake for the other one first. (I was unable to do this as each cake was of 2 kg owing to the shapes I wanted and since there were 2 parties and I wanted the cake to be cut during both, and more than 4kg of cake was not desirable so I had to make do with 2 cakes only and both cut the same cake both times)
4. During rituals and ceremonies don’t always have the same fellow being attended to first.
5. When someone asks who is the smarter one or who is your favourite- never give a clear answer. Be non-committal
6. Don’t compare them in any aspect or say one is good and the other is being bad
7. Don’t promote rivalry. Some people give one toy to one of them and wait for the other to react by crying or snatching. But true that they often try to fight for the same piece after comparing two identical pieces. In that case, divert their attention
8. They are not parts of a whole but individuals as well.
9. Milestones- May not be same for both.
a. Tejas started walking last month after many days of attempting to walk. But Ojas got up and started walking all of a sudden yesterday.
b. Similarly Tejas got 4 teeth all together in August, and Ojas has 1 full, 1 half & 1 emerging tooth.
c. Ojas imitates us in whatever we do and Tejas only smiles, albeit picks it up later from Ojas.
10. Illness- when 1 gets the other will soon follow so precautions have to be appropriate.
11. Sometimes I feel I have not paid attention to one of them the whole day may be if the other one is ill or cranky. I try not to feel guilty as I went by need of the child for that particular day.
=====================================================================================

High chair- The high chair is serving the purpose of feeding and generally seating them
However despite being strapped they stand up on the chair. Quite dangerous hence back to the bouncers…

Bath Tub- a little late in the day – gift from grandparents- they are enjoying the group bath, yes even the finger pointing is happening!! Ojas enjoys lying flat in the tub and “back float”- off course- need to be careful

Tri Cycle- even before they have started walking, grandparents have gifted them. For starters they are sitting on them with support and pressing the control button to switch on the song and lights. Both like to hang on to the same cycle inspite of having 2 of the same kind. One sits on it and the other holds on to the handle to watch the lights
Posted by Itchingtowrite at 3:52 PM

and i guess they would get identical dresses for few years... :)

Something to Say said...

Oo... I always thot it was soo cute to have twins - didnt know the nitty-gritties of twincare..

very interesting. some seem like such small things but maybe these small things go a long way in bringing up healthy (physically and emotionally) children. congrats to you for being such a diligent mom. i think you are really enjoying it, cheers!

has to be me- thanks
inder- I have answered the question on the post itself- on point no 1 . I had meant to write abt it but forgot.
art- wow she is talking so much!
@- I have folded theirs & kept them away as they started standing on it
something to say, life lover- its fun yes but need to be careful that one does not make the other one feel left out. so i do every thing twice. like making funny sounds, baby talk etc
rebel- they behave like experts on the bike..

Excellent post about twins. I never thought about most of what you said. You are so right, it's wrong to assume that twins don't have individuality just because they are twins!

i think it is better to dress them alike till they are old enough to select their dresses. if dressed differently, comparisons may happen. on most occasions, one among the two dresses would be considered better than the other. the kid who gets the other dress may feel a bit disappointed.
well, i may be wrong. i am not an expert...

I feel some points (1, 4, 5, 6 and 7) can also apply to siblings in general. It breaks my heart when i see parents comparing siblings - and I have seen plenty.

good tips gal :) in fact, talking abt twins, in my family twins run strongly... i have 2 set of twin cousins ---one in malaysia and another in usa and i shld say that the malaysian twins are quite different in their behaviour but this is not so for my american twin cousins.... maybe like wat u have mentioned above, such practices could have resulted in the above differences/ similarities among my twin cousins... interesting post :)

It was nice going through that. I always thought that having twins is really cute.

Usually, the parents always tend to keep them similar, like having the same dresses for them and stuff, but it's really important to keep their individuality as you said.

I know it would have been fun to have a twin of mine(being d only child at home), but the thought of sharing my "freaky, stupid and cloudy" individuality with that twin scares me!! Hehehe....

that is a lot of reasearch.. will pass to friends with twins.. :)

TDNA- thanks
inder- i try to rotate the dresses- none of the dresses belong to them. but actually i read that one must keep it different with each one having individual dresses like other siblings.

getting there- yes it hurts when compared. i try not to
my life- thanks - may be genetically they hav different bents too
cludy- identicla twins must be wierd and fun naa?
analog-i m sure they would have somethings to share too which u cud pass on to me

sure.. oh and incidentally.. trauma queen whom you have blogrolled, her sister has twins.. :)

hey analog, 1 of the reaosns why i blogrolled T Queen was for getting updates on the twins- unfortunately not happening so often!