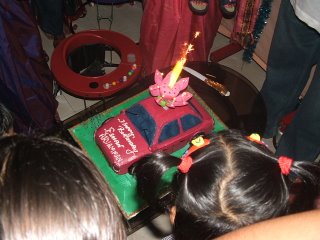 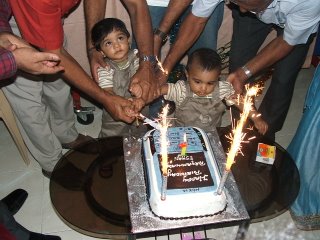 We celebrated the first birthday on 1st November. Had 2 parties, one for the 50 kids in the apartment complex. Surprisingly managing them was quite easy as we kept the duration very short. Just enough to allow the kids to play 2 games (delegated to 2 of the kids of the complex), participate in cake cutting and eat their chole, bhature, gulabjamun, samosa and cake. We cut the car shaped cake then. We had gift wrapped the return gifts - activity books/ colour pencils etc and labelled them with names of the recievers. We requested the kids themselves to distribute the books and they had a nice time doing so - pretending to be class monitors.

The 2nd party was for around 60 close friends. We cut the mobile phone cake at that time. Surprisingly Ojas (Aryamman) and Tejas (Eshan) were quite cooperative through out. The difficult part was keeping an eye on them while entertaining the guests.

Back home we are surrounded with a room full of gifts, mostly toys and absolutely no space in my home to accomodate them. Hell, I am not going to celebrate another birthday for atleast a year- I vow to myself. Some gifts like colour pencils, building blocks, alphabets, modelling clay are potentially useful, thoughtful and likeable. Among the pothers some are broken, some obviously passed on/ hand me downs, some useful for infants below 6 months, some horribly expensive, some road-side purchases, some totally useless. Without sounding crass and ungrateful, I would like to mention that I have realised that when there is a big party, everyone tries their best to give what they think would be useful to the receiver, who ends up with duplicates and not very useful articles especially where toys are concerned. I mean how many pull alongs, drums or battery operated toys can a child use. I have realised that no matter how one feels that one has selected the right gift for the receiver, a gift voucher or cash in an envelope is most welcome and easy to handle.
A lesson well learnt and I am armed with a gift voucher for the first birthday party that Ojas & Tejas have been invited to today.


Kid- Aunty I did not get the (return) gift
Aunty- What's your name?
Kid- Akshat
Aunty- Realising that the kid was a guest to the complex and was therefore not invited to the party- Did you eat?
Kid- I did not come to eat, only to take the gift

Aunty- Who won the first game
Kid- Rupa
Aunty- ok, chocolates for whoever won the game
All kids (including those who were not playing)- Aunty I, Aunty I won...

Aunty- Why are you not playing
Kid- I don't want to play
Aunty- Pulling her along- join the game, you will enjoy it
Kid- aunty, actually I am already out (of the game after playing one round)
Posted by Itchingtowrite at 3:03 PM

Belated Happy B'day to both cuties:-)

lol@ the kiddy conversation:-) so cute..

Happy birthday to both.
There is a feeling in most people that a gift coupon shows that you have not taken much effort to find something, I have heard people actually saying that. Hence the feeling that one should give something.
For the things that you got and not going to use, you can do a circular pattern and use them as gifts. :-)

Next time, don't forget to invite me...

belated happy b'day to both the tots...they're adorable!

i agree with ashish that most people think a gift voucher/money is too impersonal. it comes and it goes....not like a gift which will help remember the perosn who gifted it!

kiddos were cute and you looked really nice too

Bday wishes 2 the twins! cute pics. The party u mentioned sounds much like my son's party where I had quite a few uninvited guests! And conversation with hubby was rather similar on everything to do with the party! :)

Yay! the twins are a year old :) The party looks like it was a blast - cakes look cool, the twins look curious tho - probably thinking - where did all these ppl come from :)

Sounds like you did a nice job hosting/managing the crowd! My two cents with all the duplicate gifts - donate, and recycle (meaning gift again)!

Happy birthday to the kids. Looks like a really fun party!

The whole return gift thing! sigh. We had to give out gifts for our kid's birthday too.

happy birthday to the tots....

happy bday to the adorable twins..
ojas and tejas is it? what do the names mean?
i want a car shaped for my birthday now. thanks for the idea. :)

hey belated birthdday wishes to both of them...
must have beeen such a trouble arranging for the birthday and managing so many kids at home!!
And about the voucher thingi...personally i too dont really appreciate giving it...or taking for that matter...specially to friends...
but ya most of the elders do that!

Belated B'day wishes to the kids.

What a cool looking cake :) Came here from a comment made at Inquisitive Akka's I think...your moniker is currently reminiscent of my state of mind! I agree with @, give away the excess b'day gifts (that are still good) to a children's home. And yes, gift vouchers are the best bet anyday :)

omg this reminds me of my b'days when i was a kiddo .. cant believe im ancient now .. geez.. grr.. now all i have are the videos .. *sniffle sniffle*

hey..happy birthday to the twins... and congrats on surviving a year of two kids..

also bravo on not ONE but TWO huge parties. I echo Twisted DNA's sentiments.. 60 close friends??!

I skipped celebrating the Brat's first birthday and the second will be really close to my delivery so lets see what state I am in!

Happy Birthday to the two little guys! 1 is a huge milestone!!

And I guess you could always donate those duplicate toys to an orphanage or a daycare facility. (?)

Hey..Belated Happy Bday to both your kiddos!! So when are you sending the snaps..hey btw, I am making an attempt at this...u better visit me often!!