Of Parties at Home

I did say I was hosting parties a few weeks back.
So here's the deal...
The first party was with neighbours- long overdue- the last one we had was when we gave a treat when I discovered the twins inside me!
The spread was a large one since a cook was doing the cooking.
The starters were Daal vada, chicken 65 and Tawa fish
Main course- chicken curry, chole, veg curry, paneer, pulao and rotis and off course curd rice (against my policy!)
Dessert was my brownie and icecream.
Incidentally I had spent the afternoon sleeping since the cook was cooking (could you believe that- on the day of a party that too?) and had dreamt that the husband ate up the entire brownie and I spent my evening crying that this was the only thing I made and you finished that up!
There were drinks - Absolute Citron and lots of Real Cranberry Juice which was liked by bacche boodhe...alike 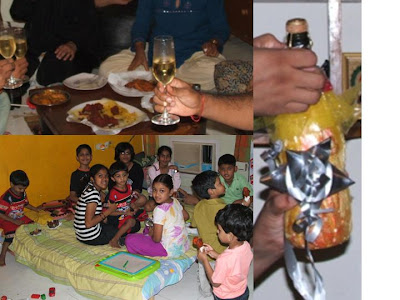 Champagne was duly popped by a generous soul!
The second one was when Sunshine family came down - another overdue one since last 6 years ...The menu was similar to above but focusing on the non vegetarian only. Chicken 65 courtsey the cook, chicken liver, chicken curry, paratha, aaloo-badi curry, (was there paneer or something else?) and dessert had brownie and fruit salad with icecream and the best was what Sunshine's Mamma brought for us.
I am waiting for her to blog about it. 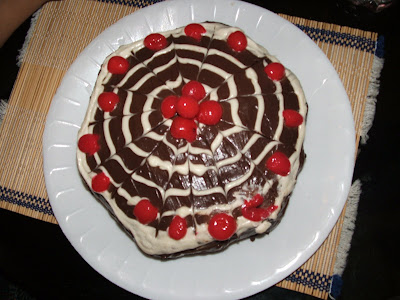 Posted by Itchingtowrite at 9:06 AM

Sounds like you are one party freak and awesome host. Wish you were staying nearby! Seriously!