Inspired by this desert terrarium I made my own- partly because I had a terracota pot that was gathering dust all the while and I had not been able to drill a hole underneath for using as a pot and partly because I had a set of cacti that could be effectively used here and partly because this seemed the easiest of the lot for me the klutz.
The steps I followed-
1. Fill the pot with pebbles- the ugliest and the most shapeless ones that I could find in my garden as these are not going to be visible. 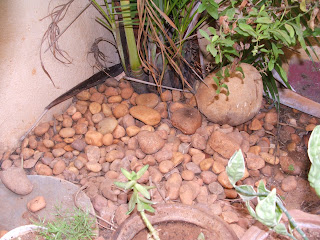 2. Put a layer of activated carbon bought at the aquarium store. 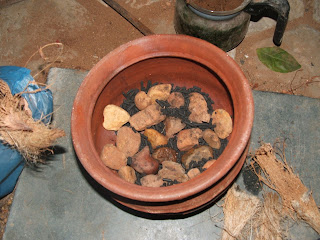 3. Instead of sphagnum moss I used coconut husk- and contrary to popular believe I really did not find it in just any shop- had to scout for a shop that had stocked the coconut with little bits of husk still stuck to it 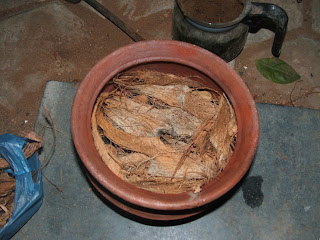 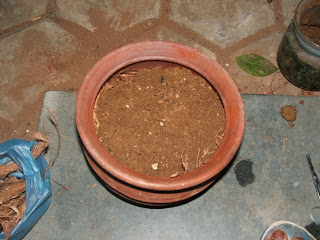 6. Find the first available animal and place it there - only to be retrieved by the kids the next day
7. Place the pretty pebbles in between the plants and sprinkle a layer of sand to go with the desert theme 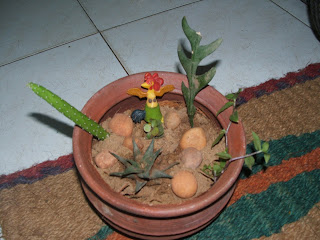 8. Protect the pot from over watering by enthu kids
Here's another one- the intention being to make it a part of the husbands liquor cabinet. I am no particularly impressed with it but let's see if it flourishes inside the bottle. 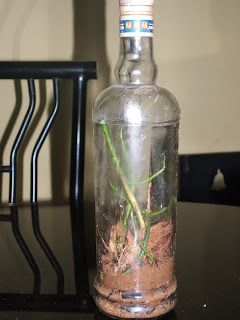 And this one in a cracked borosil jug. Again I find the jug too small to be significant. As of now this is under observation. So far so good. Let me test whether my theory and practical marks match so I could move on to larger bowls and more plants! 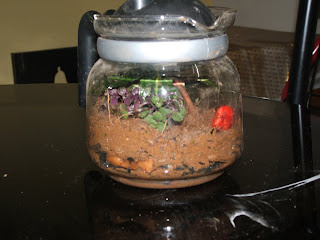 Posted by Itchingtowrite at 9:17 AM

OMG, you have talent girl!! Keep it up! Lovely arrangements. I hope they all grow to your satisfaction :)

First MAdmomma next you...You girls make me so jealous of your talents...Good luck for the terrariums....

Wow it looks wonderful.Nice way for doing so.