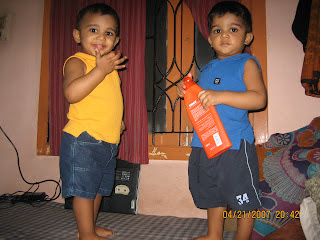 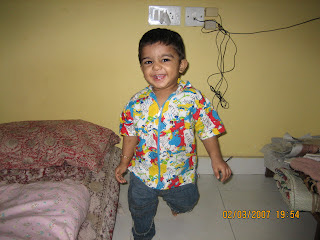 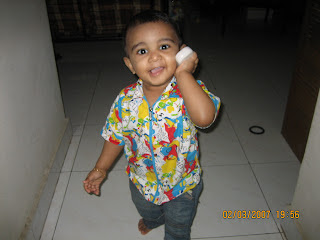 Documenting comprehensively for posterity.
1. Singing- Ojas has his version of singing aaja aaja aaja aaja. (jhalak dikhlaja..). He has also composed a tune- pachi puchi puchi, pa pucha pucha pucha…
2. Parts of the body that are pointed out- chubby cheeks, dimple chin, eyes (they can say eyes), ears, nose, belly button (Tejas says- ba bum)
3. Nature Lovers- Tejas loves the Moon and I use the ploy of showing him the moon to keep him engaged when we go for a drive.
4. Poem- Twinkle twinkle is demonstrated using the hands and little star is pointed upwards
5. Potty training?- They look downwards when they want to pee or poop. Sometimes they go and sit on their potty but get up immediately and do it outside. One complains about the other if he has peed or pooped on the floor and shows us the spot. Ojas takes the initiative of taking any cloth, especially the kitchen napkin and wiping the floor when he pees. The only thing is that he wipes anywhere but the correct spot (mercy). Tejas has earned the distinction of peeing in a plate and Ojas in a bowl of cornflakes. Mercifully they do not stomp at the shit or the pee now but walk away carefully.
6. Games- They like to thump at the ball and imitating me they hold it against the wall- their version of throwing against it. Also they put the cork on their toy racket/ ball on their tennis bat. They use their bouncer chairs as rocking horse. They discovered and enjoyed playing train.
7. Animal antics- When we say monkey- they scratch themselves. They imitate parrot- tae tae, tiger- aaggh, cat- maaau. They love to see the kitten that comes home and the fish with the fishmonger who comes home. Their dream came true when we allowed them to touch a puppy on the beach
8. Dangerous games- When I sit against the buffet counter, using me as a ladder, they climb up the counter. They also climb the step ladder and stand straight on the chair. They stand at the edge of the bed and wait for me to scream. (Refer Picture and their expression- waiting for the scream). They used to regularly climb the glass side table and finally Ojas managed to break it. He called my mom and did the demo of the same with a sound aaaa to indicate the shattering of the glass
9. Little Helpers- When my sis comes home to stay, they take out her nightie from the cupboard and give her. When we come back home, they give us the bathroom slipper and when we are going out, they give us our good sandals.
10. Snacks- They discovered Parle cheeselings & Sixer and loved it.
11. Sleeping- Ojas can sleep by himself, after drinking milk and throwing the bottle away. Sometimes he needs a little bum patting or back rubbing. Tejas feeds, then switches over to the bottle and then sleeps off by himself.
12. They love back massage- when I say massage or michaach they bring the oil bottle
13. Sharing- Whoever gets the milk bottle or biscuit etc, he hands over one ti his brother before having one for himself. Ojas throws it at the face literally if we do not accept whatever he is giving.
14. Sibling love- when we say “pyaar karo/ kiss” they embrace and kiss each other. They even do massage for each other when prompted. If one is sleeping the other comes and wakes him up by saying vai vai- meaning bhai.
15. Sibling rivalry- If I am getting water for them the one closest to me will shove the other away so that he gets the head start over drinking the water.
16. Artfulness- If one wants a particular toy/ object which the other has, he diverts him by offering something else. The other will clutch the desired object tightly before accepting and throwing the bait far away. If they have something in hand which I am likely to snatch away, they hold it behind their back. Sometimes they say Kaakaa – meaning crow took away some article, if we want to take it away from them.
17. Attention Seeking Tactics- bang their head on the wall/ floor and then touch the spot on the head and cry.
18. Bossiness- They scold the maid if they slip on wet floor. They scold anyone who comes home after a long gap.
19. Association/ Recognition- they point correctly at our pictures. When the door bell rings after 8.30 pm they say Daddaa.
20. Yuck things- they drink the bath water while bathing. They scoop and eat soap from each other's body. They try to help me while I am washing their bum after potty. and this one takes the cake- Tejas scratches his bum and then licks his fingers, all the while looking at me for reaction.
21. make-up- When they see me in front of the mirror, they make motions of applying cream, lipstick and sindoor. Ojas dropped custard powder on the floor and used it like talcum powder all over himslef. They love to squeeze out cream/ vaseline and apply on hands/ face. Refer picture
Posted by Itchingtowrite at 12:37 PM

loved the compilation... and the two look so grown up now!!!

fantastic!! They are really turning into little devils- i guess they take after their mother...hmmmmmm

what is it with kids and make up and cream

and yes cheeselings as well

cute list ITW.Reminds me of the days when I was mothering 3 kids.A flying kiss from me to ojas ansd Tejas.Are they identical?

btw, if you're interested I did a review on ST abt a book on the moon - Tejas would love it.

Er... guess you'd want to hide the peeing on the plates thing from guests you plan to have over for meals ;)

hey . am so happy to know that you are from ranchi. i lived near Firayalal's. Actually, my parents still do with the youngest brother but for me it seems as if I had left that place ages ago. But, it still is and will always remain home to me!
I still love going back. Howsoever much it might have had changed in the past few years.

//They scold the maid if they slip on wet floor.
Wow!Looks like O&T are already in control!One less thing for you to keep tabs on!:))